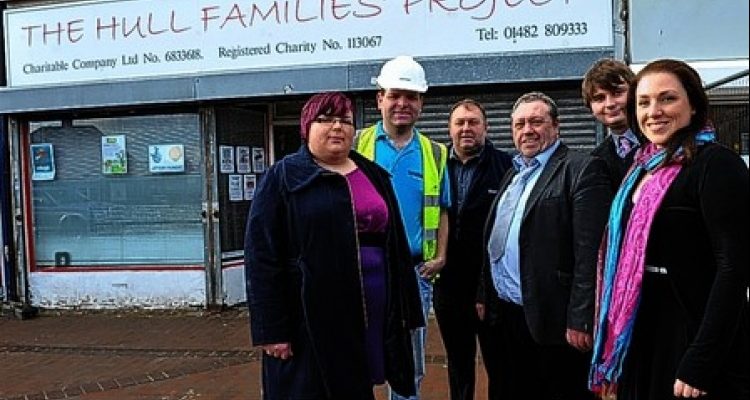 As part of Hull Esteem Consortium, Sewell is pleased to announce a £100,000 project to help the Hull Families’ Project has been completed.

Originally only asking for a lick of paint, the project snowballed, pulling in volunteers and organisations from across Hull who were eager and willing to help. Ann Newlove, of Esteem, which is the consortium responsible for delivering Hull’s £400m Building Schools for the Future (BSF) project, said:

“It started about eight months ago. The Smile Foundation requested some help for the project saying it needed a lick of paint and help with some electrics. When we walked through the door, we knew that was not enough. How they were managing to work in there was anyone’s guess, really.”

“The team had originally planned to use the Esteem supply chain to complete the make-over. But as word spread, more and more people and companies wanted to lend their support to such a worthwhile project. Then it was all hands on deck.”

Walls were stripped or knocked down, the kitchen was moved upstairs, a bigger meeting room created and the whole centre was transformed to meet the needs of the charity. Mrs Newlove said:

“We were very proud, it was very special for the staff and we realised how much it was appreciated. When you look at the ‘before and after’, it’s a huge change.”

And for one young man it was a project he can boast as his first in charge. Esteem staff were busy building Hull’s multi-million pound schools so the task was handed to one of Esteem’s apprentices, Tom Fletcher, to take charge of the project. Mrs Newlove said:

“From the outset, we knew the scale of this project could not be underestimated. With the BSF programme in full flow and much of our team focused on that, we can honestly say we were slightly concerned as to how we could deliver a project on this scale. Enter apprentice Tom Fletcher. We didn’t see him as an apprentice. The way he handled himself was great, he was so knowledgeable. It was a great opportunity for him.”

“I knew this project would be an enormous challenge. I knew it would require numerous hours of co-ordination and planning but it was a scheme I was proud to be trusted with. If there were any issues, having the team I did around me, I knew anything could be solved.

There were so many high points, from being entrusted with this project to the reaction on handover day. I think the only other point that really stuck with me was when we were getting down to the wire on programme and still did not have a kitchen. Craig and I hit the local suppliers and walked away with a donated kitchen and a huge sense of pride that people we had not met before believed in what we were doing and were willing to help us out.”

The project, in Greenwood Avenue, north Hull, provides tailored one-to-one support for families who are experiencing a crisis due to ongoing difficulties or major life-events. Staff help every family member find the right way to cope with stressful and difficult times, and supports the whole family in creating a better future together.