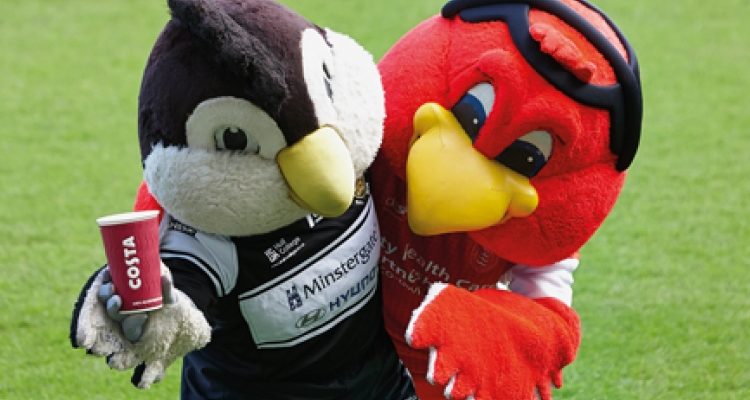 Back your team with every sip!

In the run up to the first derby of the rugby league season, Sewell on the go is asking fans to show support for their club with a unique coffee ‘selfie’ campaign.

Sewell’s Your Coffee Your Choice competition will be encouraging fans to show their support for Hull FC or Hull KR by purchasing a COSTA coffee with their team’s branded cup, at any of the Sewell fuel and convenience stores across the city. Customers will be encouraged to tweet a photograph, or selfie, to @sewell_retail, with their club’s hashtag, #COYH for Hull FC or #WEAREHKR for Rovers.

Patrick Sewell, Managing Director of Sewell on the go, explained this was a fun way for customers to show their support ahead of rugby league’s biggest derby. He said:

“Being a local independent business, we know how much of a buzz derby day creates across the city so it’s great to join forces with both clubs and put a social media twist on the rivalry ahead of Easter weekend.

“We have stores close to both grounds so it’ll be interesting to see, from the tweets and selfies stats, if there is still an east and west Hull divide between supporters.”

Votes and selfies will be displayed on a ‘stats’ board at www.sewellonthego.co.uk in the lead up to the game, and the winning team will be announced at half time on the match day. The best selfies from Hull FC and Hull KR supporters will win a meet and greet with a player from their team, over a coffee, at one of the Sewell stores. Signed shirts are also up for grabs.

“Derby day is always special in the city and already the build up is starting to grip the fans ahead of the Easter Weekend. Sewell Group are close friends of both clubs and we think this is a great way to fuel the rivalry ahead of the big match.”

“It’s over to the fans now to show their true colours!”

“There is no bigger game in domestic Rugby League than Hull KR vs Hull FC so it’s great to see the Sewell Group embrace that friendly rivalry with this fantastic initiative.

“There is no doubt about it, derby fever is already gripping the city and this will give further prominence across Hull to the big game. We look forward to seeing our fans’ ‘selfies’ with the specially branded cups across Twitter in the run up to the game.”

For more details about the campaign, prizes and promotions visit a Sewell fuel and convenience store, www.sewellonthego.co.uk or follow @sewell_retail.

Sewell on the go stores are conveniently located in the heart of communities: