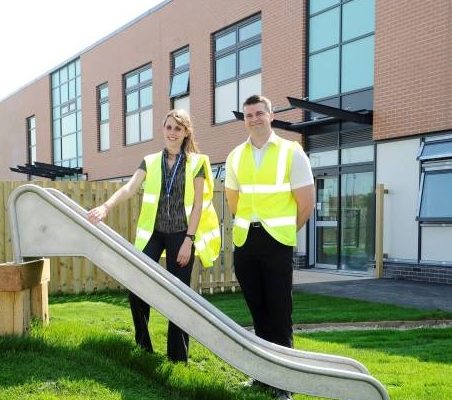 Development of primary school is complete

Sewell Group is pleased to announce the completion of Kingswood Parks Primary School. Pupils in all year groups will walk into the new building for the first time on September 8.

Carolyne Bellamy, the new Head Teacher at the school said:

“It is a state of the art school. The pupils are going to love it. They will be a little nervous at first but very excited. They are going to be the first ones in here, making history.”

With the number of houses growing on the estate, parents were crying out for a school. Already, there is a waiting list for the 26-place nursery and the reception class is over- subscribed.

“We are filling up rapidly in Key Stage One and Key Stage Two as well. So, if parents want to get their children in, they need to apply now. Parents have been asking for this for a number of years, so it is long awaited. We want to work with the community here to make this one of the most successful schools in Hull.”

Mark Boothby, Project Manager from Sewell Group says it is great to be creating schools for the city.

“It’s been brilliant to work in close partnership with the teachers and sponsor who have played an integral role in the design. It is a relatively new estate and this is providing something for the community that is much needed. We have created a school that provides the perfect environment for world class learning and development. It’s truly fit for that purpose and will give the children the best possible start in life, their early years being so important.”

The school will hold 315 pupils. Features include doors straight from the outside into classrooms, which pupils will use rather than the main entrance.

Other features include a hall with stage and lighting as well as a studio upstairs. There is a central ICT suite on the first floor with surrounding classrooms. Outside, pupils will have a climbing wall, external chalk board and hopscotch and checkers boards on the tarmac.

Public artwork will also be on display.

The academy is sponsored by Highlands Academy, which has also formed a multi academy trust (MAT), who have input hugely into the development Bude Primary School will join the trust from September.

“This school has the potential to be one of the flagship schools for the city. We have had considerable input. We have had a fabulous working relationship between everyone involved. Everyone is in it for the right reasons and Sewell has been fantastic. It truly has been a proper partnership.”

An open event for parents and the community will be held at the school on Monday, July 21, so they can have their first look around the facilities.