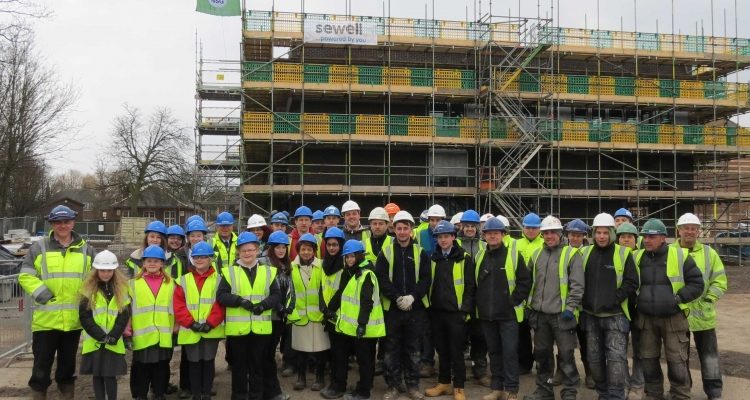 Flying the Flag at Newland School for Girls

MP Diana Johnson has joined Angela Martinson, Head Teacher, Sean Henderson, Sewell Group and a selection of pupils, past, present and new to raise a flag on site at the Newland School for Girls construction site on Inglemire Lane.

The flag raising ceremony celebrates the end of a week long engagement event between Sewell Group and the school as part of the nationwide STEM week (Science, Technology, Engineering and Mathematics). The event also marks less than six months to go in the project due to complete in September. Sean Henderson, Project Manager, Sewell Group said:

“Today’s event has nicely coincided with the end of STEM week, a fantastic week for all involved. Raising the flag today has also provided us with an excellent opportunity to mark the good work the site team has done so far and thank them for their hard work. It was great to see year six pupils who will join Newland in September and I’m sure Jo Gressey from Victoria Dock Primary School who unveiled the flag will remember this for many years to come. The raising of the flag gave us the first public appearance of the new school branding which looks fantastic.”

“STEM week with Sewell has been fantastic! We’ve had so much positive feedback. The week has been enjoyable and added value to the girls in terms of their personal development, career planning and practical skills. The flag raising event really has been the icing on the cake, the atmosphere has been brilliant. It is really important for the girls to visit the site and see the scheme grow and we have had an excellent mix of people today with our MP Diana Johnson and old, new and current Newland pupils.”

Diana Johnson, MP Hull North said: “It was fantastic to be given the opportunity to attend today and see how the development is coming on. The merging of the new and old facilities will be great, we can’t wait to see the pupils move back in for the new term in September. It was wonderful to see the new school colours and slogan, they’re really eye catching.”