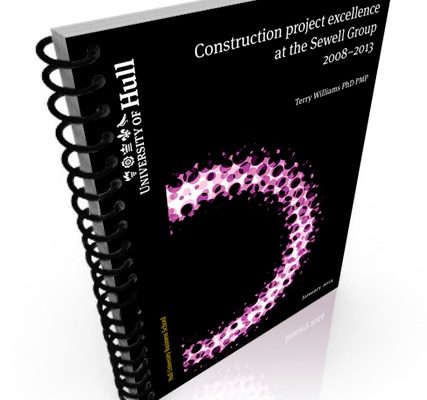 Professor Terry Williams, dean of Hull University Business School, will be sharing his verdict on the project delivery of the Sewell Group to an international audience at the PMI Global Congress (EMEA) on 11 May.

Following on from a research report issued last year, Professor Williams’ research scrutinised the process of project delivery of schemes delivered as part of the NHS Local Improvement Finance Trust Programme and the Building Schools for the Future Programmes, between 2008 and 2013.

The independent research considered whether the projects delivered for the health and secondary education estates across the city of Hull were generally regarded as successful due to ‘feel good’ created from significant regeneration investment, or if Sewell had in fact excelled in their role, and if so why.

Ultimately, it was found that there was ‘construction project excellence’ and there were many interacting reasons for this.

Professor Williams said: “My report last year showed that the work that Sewell Group carried out as part of the Government BSF programme and the first phase of the LIFT programme was excellent.

“It is clear that Sewell look at project ‘success’ in its widest sense, not only traditional project success criteria, but also wider criteria such as customer satisfaction, user and community satisfaction, and lifecycle performance.

“This achievement of success across a whole range of criteria came from a multi-faceted set of interacting causes with a number of factors at the root; a major key factor was the organisational culture, as well as the sense of locality of the company.”

To reach his conclusions, Professor Williams conducted workshops with teams and managers to draw up causal maps of effect that led to project ‘success’ alongside analysis of Sewell Group’s processes, systems and evidence.

He continued: ‘Although Sewell is an academic partner of the Business School, this was an independent piece of research into project distinction in the region. We wanted research to understand why and how the organisations achieved this excellence – so we could all do better in our projects in the future.’

“It’s a big achievement to be used as a case study on an international stage. I hope the findings in Professor Williams’ paper are a fair reflection of our customers and communities experiences. We’ve always been big on people engagement and culture to drive quality and performance and I’m pleased this was highlighted as a golden thread throughout the study.”

“We have been privileged to work with some fantastic partners over the last five years, particularly in health and education. We’ve been fortunate to know that, as long as we continued to deliver on our promises, we would remain the consistent construction partner. These long standing partnerships enabled us to continually learn and develop as a construction and facilities management service provider.

The report also stated that Sewell created significant local economic impact over the past 5 years. Through the use of local labour, each £1 of the £200m spent with Sewell on these developments re-circulated just short of 3 times in the region.

As well as the presentation at the PMI Global Congress, the research has been turned into a paper for an academic journal.